England vs Australia match was canceled due to rain, interesting race in Group-1, Both today’s matches were washed out in the water as rain in Melbourne claimed its second game of the day as the fixture was abandoned without a ball being bowled. New Zealand once again finds itself in a strong position with the points split between Australia and England. Three games down and only one win to their credit is the only net run rate separating England, Ireland, and Australia, who are now second, third, and fourth on the points table.

Friends, let us tell you that in the morning the match between Afghanistan vs Ireland was also to be held on this ground but that too was stopped due to rain and both the teams had to be satisfied by 1 point each. More matches in this year’s ICC Men’s T20 World Cup Australia were canceled due to rain.

Let us tell you that in Group 2, Team England will now face New Zealand and Sri Lanka while Team Australia will face Ireland and Afghanistan. Ireland has the most brutal matches ahead – New Zealand and Australia, but another twist cannot be ruled out considering the tournament’s amazing days so far.

At the same time, the defending champion Australian team also has three points from three matches. The team has moved to fourth place. Sri Lanka has two points from two matches and the team is in fifth place. Although Sri Lanka’s net run rate is better than all three Australia, Ireland, and England. In such a situation, winning a match, the Sri Lankan team will go straight to first place. At the same time, Afghanistan’s team is in sixth place with two points from three matches.

Australia vs England T20 World Cup: Defending champions Australia will face England in a Group-1 match of the Super-12 round today. This match between the two was considered a virtual knockout. The winning team would have continued in the race for the semi-finals. However, rain wreaked havoc in this match as well. Read Also IND vs PAK, T20 World Cup, India Won by 4 Wickets 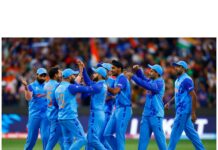 Jasprit Bumrah ruled out of T20 World Cup 2022 due to an injury: BCCI Sources