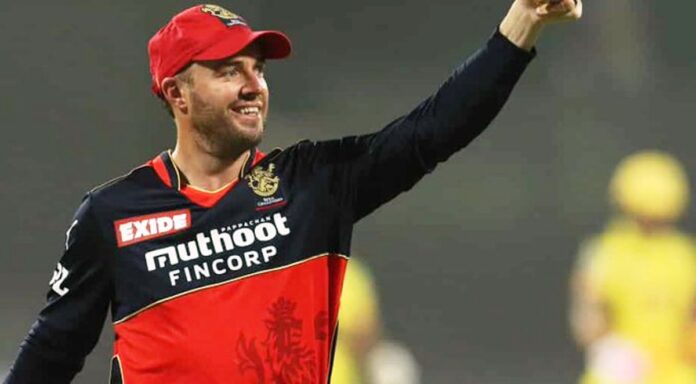 “I haven’t decided yet but I will definitely be around the IPL 2023 but not sure in what capacity and I’m missing RCB There might be some games in my second hometown in Chinnaswamy Bangalore and I would love to return in IPL and I’m looking forward to it.” – Said Ab De Villiers (To VU Sports YT)

I have heard that we have a few games in Bangalore next year, so I would love to return to my second hometown. I’ll be definitely around the IPL next year in whatever capacity. (To VU Sports YT).

A single sheet of paper can’t decide our future and A world cup trophy cant define Ab de Villiers’s legacy. AB de Villiers, known as “Mr. 360 Degree”, was added to their team squad by RCB in the year 2011. He played a total of 156 matches for Bangalore and scored 4,491 runs at an average rate of 41.20. Apart from this, 37 half-centuries and 2 centuries are also recorded in the name of de Villiers.

Let us tell you that after the end of IPL 2021, AB de Villiers announced his retirement from IPL. While announcing his retirement, he said that now he is not feeling that agile at the age of 37 and that is the reason why he is retiring.

Former South Africa captain and Royal Challengers Bangalore legend AB de Villiers is all set to return to the cricket field. ‘Mr 360 Degree‘ had announced his retirement from IPL only last year, after which he did not appear in IPL 2022.

Share
Facebook
Twitter
Pinterest
WhatsApp
Previous articleBarcelona vs Elche Highlights, Robert Lewandowski made 2 it 3-0 from the get-go in the final
Next articleIND W vs ENG W highlights, India won by 7 wickets, Smriti Mandhana (91) and captain Harmanpreet Kaur (74 not out) made the lead 1-0